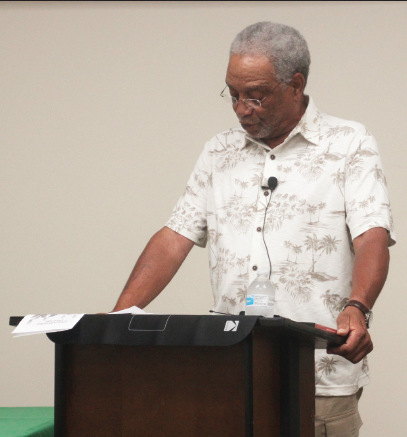 Nathaniel Mitchell addresses the crowd before the screening of “Unearthing the Dream” at ASUTR Saturday, June 11. 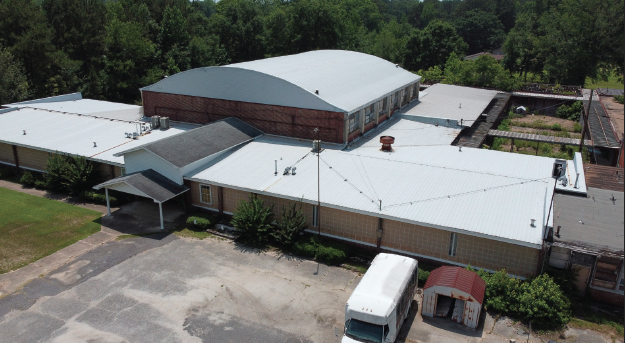 Nathaniel Mitchell addresses the crowd before the screening of “Unearthing the Dream” at ASUTR Saturday, June 11.

Arkansas State University Three Rivers hosted a showing of "Unearthing the Dream", an award-winning documentary film released in 2012 that examines the desegregation of the Malvern school system in 1968, and the effect that event had on African American students in the area.

Filmmaker Pam Uzell directed and produced the doc, which was commissioned by the Henson Benson Foundation. The film was named Best Documentary at the 2012 Arkansas Black Independent Film Festival and was an official selection at that year’s Hot Springs Film Festival.

The showing that evening was sponsored by the Foundation and the 1966 graduating class of A.A. Wilson High School—educational home to African American students in Malvern until integration was forced upon them and the school was closed permanently in 1968.

The Henson Benson Foundation is a private non-profit organization that serves the youth of Hot Spring County through philanthropic efforts, volunteerism, and educational assistance via scholarships and grants.

The Foundation was established in 2010 by Dr. Samuel G. Benson, a renowned and highly-educated forensic psychiatrist who was born in Perla in 1935. Dr. Benson set up the Foundation to preserve black history and promote education and leadership development.

The evening began with a greeting by Nathaniel Mitchell, president of the A.A. Wilson graduating class of 1966. Mitchell first relayed a little history about the upcoming Juneteenth holiday, which marks the official celebration for the end of slavery in America. Malvern will have a Juneteenth celebration this weekend with a parade Friday evening and a festival at Centennial Park on Saturday, beginning at 4 p.m.

Henson Benson Foundation Board Pres., Marion Gibson, then introduced the documentary to the audience. Gibson’s mother, Lillian Beard, is featured in the film as a former student of the school and shares her personal perspective and experience during interviews showcased in the movie.

“It documents Malvern’s African American community, while forced to accept second-hand materials for its schools, refused to accept a second-class education for its children, giving rise to schools that inspired and cultivated success and pride,” according to information made available by the Foundation.

“The 1968 desegregation of the Malvern, Ark., schools planned to eliminate this separate and unequal system. But in the process, it forced the very students it aimed to help to sacrifice their shared experience and identity,” the statement reads.

One of the film’s first opening scenes is set on the campus of A.A. Wilson High School, built in 1952 and still standing at 404 North Banks Street in Malvern. The first school in the area for African American students was Perla Elementary, followed by the Malvern Rosenwald School, or Malvern Colored Elementary School, built in 1929 and renamed Tuggle Elementary after A.A. Wilson was added to the site to accommodate a growing number of students.

African American families began to flock to Malvern in waves from the more rural parts of the county to look for work after slavery was abolished in the late 1860s. In 1921, ACME Brick opened a plant in Malvern which would give African American employees a way to provide a better life for their families, as they paid white and black workers on an equal basis.

Big employers like ACME Brick and Reynolds Metals Company, who arrived to the area in the mid- 1940s, gave hard-working citizens a stable, fair wage. African Americans worked alongside their white counterparts in the factory and made a good life for themselves, living happy and secure despite the ever-present racism, inequality, and prejudice woven through the fabric of America.

Students who went to A.A. Wilson High School received expert education from former students of the school who graduated, went to esteemed colleges around the country, then came back to Malvern to educate the students of the African American community.

Two noted educators at the school, Principal Edward and Mrs. Henrietta Bailey, beloved counselor at the school, were former A.A. Wilson students who earned advanced degrees at Columbia University and returned to Malvern to serve their community.

Other beloved teachers from the time period included Mrs. Joan Henry and Mrs. Sophronia Tuggle, whose name graced the elementary building because of the profound impact she had on her students and her community. A. A. Wilson was so named for beloved local educator Annie Agnes Wilson.

Teachers at the school were invested in their students’ education, constantly pushing them to achieve and working closely with parents to assure their child’s success, both in the classroom and in the real world beyond high school.

The school boasted an undefeated football team, the Dragons, and an impressive and award-winning band. They did the best they could with substandard, leftover materials they picked up weekly from the white school down the road.

Gibson’s father, a former student at Wilson, would wear two left shoes on his feet to play football because that’s all that what was supplied to him, and their first jerseys were sweatshirts numbered with shoe polish, but these obstacles didn’t stop them from becoming one of the best football teams in the state.

In their own community, life was somewhat idyllic, but African American children were periodically reminded of their second-class status when they entered a white-owned business along South Main Street.

The film takes viewers back to when business was booming in downtown Malvern, and the sidewalks were packed with potential patrons of the many shops and stores Malvern was home to back then. Whites and blacks alike spent their money here, but the treatment blacks received were treated starkly different.

One of the hardest moments to watch in the film was the recollection of one male student who attempted to buy a cone of ice cream in a local soda shop when he was very young. A white child purchased an ice cream first, and the African American boy eagerly waited his turn to exchange his money for the sweet treat, but he was denied a cone because, as the counter person ignorantly said, “We don’t serve your kind here”. The boy didn’t understand at first, as he saw his chosen flavor right there in front of him, but after a few more denials, the picture became crystal clear.

Blacks were rudely reminded of the animosity and prejudice when mixing with the white community, but at A.A. Wilson, they flourished in a safe, encouraging, family-like environment. Many of the students were vaguely aware of the hatred permeating the air, but they were able to avoid the worst of it because of their surroundings.

At A.A. Wilson, the students thrived in their classes and were constantly supported with the daily message that they could accomplish anything they set their mind to if they worked hard, believed in themselves, and trusted in God.

The Civil Rights Act of 1964 was supposed to help matters, as it ushered in voluntary integration for parents who had their children's best interests at heart and wanted them to go to schools that had better funding and resources. African American students began to be pulled out of their familiar schools, and their reception at other white schools in the area was tepid and less than welcoming.

The first integration efforts saw some Tuggle students transferred to Fields Elementary. Lillian’s youngest daughter, Barbara, was sent to the white elementary school where the teacher completely ignored her and ended up assigning her to special education classes, possibly in an attempt to pressure Barbara’s mother to take her back to Tuggle, but she refused to do so.

Alvin Murdoch was one of the first original A.A. Wilson students to be transferred to Malvern High School as a member of “The Malvern 7” in 1966. Murdoch remembered he and his fellow transfer students were met with an angry crowd their first day at the new school, similar to the angry mob the Little Rock Nine faced when they walked through the doors of Little Rock Central High School in 1957.

In 1968, the U.S. government mandated black schools be dismantled, and A.A. Wilson’s doors were closed for good.

Records and memorabilia from the school were taken to the dump, the building was left to slowly rot, and Wilson students who were cheerleaders, band members, football players, and active participants on campus were denied the same opportunities at their new school.

African American students at A.A. Wilson went from a safe haven to an inhospitable environment.

“Black students who entered Malvern Senior High School in the fall of 1968 began their school year without the support of the institution that nurtured them,”as stated in “Proud Legacy: The Colored Schools of Malvern, Arkansas and the Community that Made Them” written by Ajuan Maria Mance to complement the film. “Their only choice was to steel their nerves, master their resentments, push through their grief, draw deeply on their Dragon pride, and move forward.”

As black business owners and families moved out of the area for better opportunities, the financial state of the downtown area suffered greatly. South Main Street and the blocks enveloping it, once busy and vibrant, now stands in the shadow of its former glory.

Efforts are being made to save the A.A. Wilson facility, but deferred maintenance has quickened the decay. Anyone who would like to learn more about how they can help to save this building, added to the National Register of Historic Places in 2005, should contact associates with the Henson Benson Foundation at 501-332-7556.

ASUTR President, Dr. Steve Rook, informed the audience that when the Historic Ritz Theatre renovation is complete, the first film shown there will be “Unearthing The Dream”. Work at the theatre is not expected to be done until the summer of 2023, but the public can currently find and view a copy of the documentary at the Malvern-Hot Spring County Library, the ASUTR library, or by contacting the Foundation.